LATERPOST: Why I Can’t Finish My Book

A few months ago, I finally said it out loud (and online) that I was working on a book. If all goes well and according to my tight deadlines, I should be finishing up a first draft of the book within the next six weeks.

That means all those medium vanilla Dr Peppers, all those words, all those naps/brainstorming sessions on my office couch, all that work will finally see the fruits of labor and at the end, I’ll have a rough manuscript.

But I have to be honest. I can’t finish it. I’m stuck.

What I’m Working on

I started this book just after Derek and I got married, and I slowly pieced together some 20,000 words and then in January, I scrapped most of that and started over. It’s been a sweet and tough process, and it’s been so wonderful to see Jesus show up with grace on the afternoons where I don’t want to write.

I’m not a theologian or a bible expert. I’m just a girl who has long wanted to write a book about faith and fear, and I’m praying it makes it to your eyes one day. The goal is to finish this draft up within the next six weeks.

A few weeks ago, I gave a sampling of a couple chapters to a few friends and Derek and nobody said they hated it, so I’ll consider that a victory.

Also, if you’ve clicked over on any of my HeartSupport blogs or any of the other places I’m honored to contribute to in the last few months, thanks for that. As a writer, you always wonder if the words just stick to the pages or if someone, somewhere finds a little bit of hope in them.

I’ve set some hard deadlines for myself in the next few weeks. Be praying that I’ll find the right words to finish this draft. Also, here’s a look at my writing buddy and the face he makes when I pitch bad ideas to him: 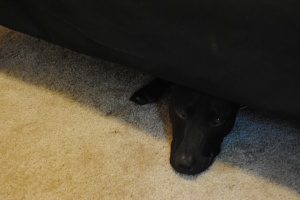 Why I quit chasing a reckless lover

I quit my job today.

I’m a freelance writer, so the correct thing to say is I quit one of my jobs, but it was my biggest contract, and today, I let it go.

I didn’t want to at first because the money was good, but mostly, I didn’t want to because I’d have to face a tough reality that I’m not the great journalist or editor I thought I’d be by now. In fact, I’m not even close, and I knew that if I let that job go, I’d be cutting ties with my dream career even more.

Read the rest over at HeartSupport.