The prodigal dog (and what it means for you and me)

We’ve never been a pet family, but a few months ago my parents adopted a dachshund mix that followed my younger brother on one of his cross country runs. When no one claimed him at the animal shelter, my parents brought him home and named him Miles— a nod to how he was found.

I’ve been amazed when I’ve visited home to find a bed for Miles inside the house and to hear stories of his regular trips to the pet store for his oatmeal baths.

I texted my mom one afternoon, joking about Miles’ new lifestyle and home: “Seven months ago, he was in the woods. Today he is getting oatmeal baths.”

My mom’s response: “That’s what God does for us.”

Leave it to mom to say something like that.

But I was struck by the perfection of it. Our old lives, the ones we knew before grace, are gone. You get a new life, a new promise, a new home.

It’s one of the most basic principles of Christianity, but the trouble is we get so tripped up when we bump into our past. So we wallow. So we say “I’m working on it,” and we think we don’t deserve the party.

The prodigal son didn’t expect a party, but he got one.  He had left home and had squandered his inheritance and when he got home, he got a blowout. 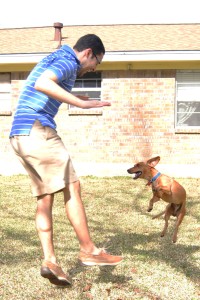 How Star Wars strengthened my marriage

I love Star Wars. I once carved a pumpkin of Darth Vader’s face. I also spent my weekends in college swinging a light saber in my apartment and scaring my roommates.

A few months ago, Derek and I bought Lego Star Wars for Wii and after 55 hours of dedication and a few AA batteries, this happened:

I’m no expert in marriage. I’ve only been married eight months, but I think I can say this with confidence: If you want to see your marriage grow, add some Jedi to your life. In all those hours, we faced a range of marital emotions.

Me (to Derek after pulling off impossible controller skills): “You’re my hero.”

Derek (before starting gameplay):  “OK. I have a good feeling about this today.”

If you’re stuck on the fact that we spent 55 hours playing this game, know two things: 1. We bought this game in August. 2. We don’t have kids.

Did we spend too much time on this game? Maybe.  Did we dream about lightsabers and ewoks? Of course. But we also managed to defeat the empire and restore balance in the force. How many marriages can say that?

A cold and City Council meetings are keeping me plenty busy this week. For now, you can find my latest article for The Faith News here.